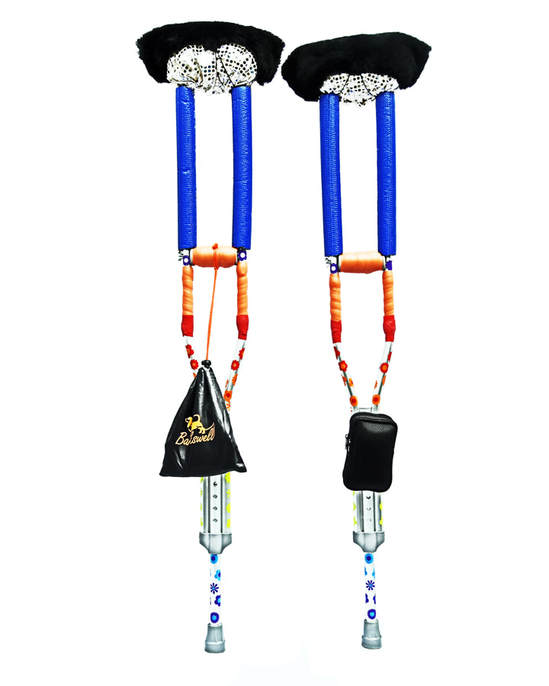 "I'm a wheelchair user, but despite all of London's cabs being accessible in theory, in practice it's impossible to find a taxi company that will transport me. I therefore keep a second wheelchair at work, and walk back and forth from the cabs as best I can. Using a walking stick was causing me more and more pain in my hand, so I up-cycled these cheap crutches instead, which I bought online.
The uncomfortable thin plastic covers over the arm rests have each been replaced with a quarter of a cheap memory foam cushion (this can also be recycled from an old wheelchair cushion). Each quarter cushion has been tucked through underneath the arm rest, with the two halves joined over the top of the arm rest with double-sided tape. An old double-sided cushion cover has been cut into two, and each resulting fabric square has then been tied over the top of each quarter-cushion and through underneath, supplemented with safety pins. On top of each quarter-cushion, a sheepskin car seat belt cover has been secured over with elastic for maximum comfort.
The top struts of the crutches have been covered with pipe insulation, slit down the sides with scissors and then glued with contact adhesive. This prevents the metal from digging into the body. Bicycle handlebar grip tape has been stretched over the hand grips and continues down the struts below to increase comfort further, before being secured with electrical tape. Decals complete the decoration.
One crutch also holds a bag for a waist-lead for my assistance dog, while secured to the bottom of the other is a pouch for an inflatable cushion, necessary for sitting comfortably on a wall or other resting place if the cab is late."
-Ju Gosling

Dr. Ju Gosling (aka ju90) works largely with digital lens-based media but also with performance, text and sound, and situates her work within the theories and traditions of the international Disability Arts movement. Based in East London, Ju now leads two London 2012 Paralympic Legacy organizations in addition to her own practice: Folk in Motion CIC and Together! 2012 CIC.

Both crutches’ arm rests are padded and covered in black sheepskin with white sequined fabric underneath. The top struts are bright blue, and the hand grips and lower struts are wound in orange bicycle tape. The lower ends of the struts are wrapped in red tape. Below that, the aluminum struts are decorated with red and orange flower decals. The height adjustment segment is adorned with scattered bright yellow flower decals. The single lower foot has blue and white flowers decals and a gray rubber tip.
The crutch on the left has a shiny black, draw string bag with a gold dog on it. It is attached by a cord to the hand grip. The right crutch has a small black zippered pouch attached to the top of the adjustment segment.
-description by Teri Grossman
DONATE via Fractured Atlas!