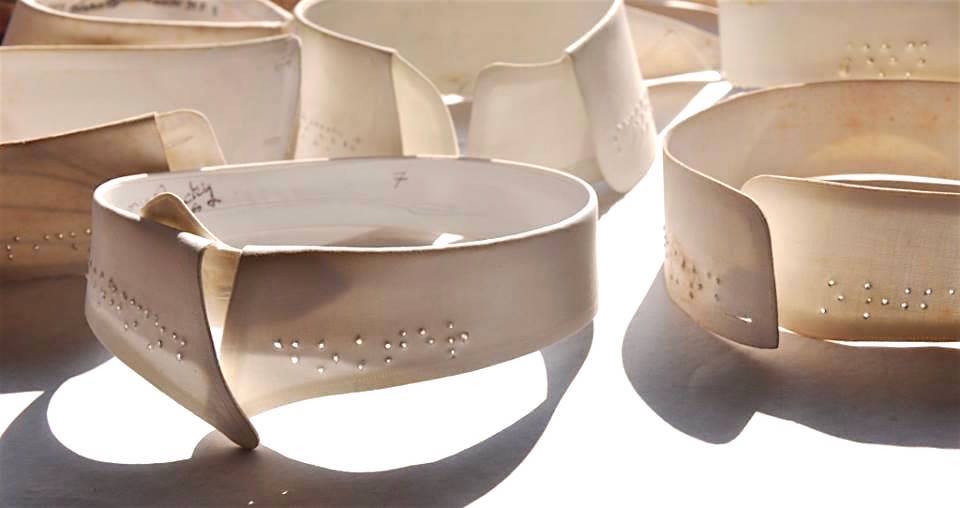 People:
A series of antique starched collars pierced through with Braille letters spelling out the names of various people. The original installation included a book of the Braille alphabet and the opportunity for audience members to "read" the collars.
Arm-Prostheses:
An installation of a pair of antique kid leather gloves embroidered with a body in light blue and skeletons in red.

Annelies Slabbynck lives and works in Ghent, Belgium. At 17 Annelies started her art education by studying Decorative Arts and Crafts; she now specializes in ceramics. Along with her clay work, antique garments, embroidery techniques, and medical objects/themes take a prominent place in her art. Her first encounter with China was in 1997, where she stayed for four months at the Central Academy for Art and Design in Beijing. She alternated living and working between Belgium and Shanghai from then until 2015.

People
The color photo is of a collection of old fashioned, stiff white collars. All are adorned with knots or punctured with holes that form Braille letters. One is a two-inch-high white eyelet collar on a cardboard band. Red French knots adorn the upper edge.

Arm- Prostheses
A pair of above-the-elbow, cream colored, leather gloves lie on a flat white surface. The right-hand glove rests palm up. The 3-inch-long narrow slit opening that begins just below the wrist is adorned with three tiny pearl buttons opposite three tiny buttonholes. On the forearm is an outline of a figure sewn with pale blue stitches. The spine, ribs, hips and limbs are rendered in red thread. The left-hand glove rests palm down with the same blue figure. A gap appears between the red stitches of the ribs, sternum and arms and another between the hip bones, legs and feet.