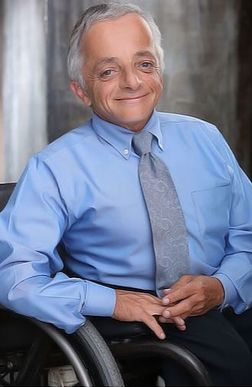 Written and performed by Paul Ford

My name is Paul Ford. I am an actor, a former musician, and most importantly a single dad. I have two amazing little girls Jadzia and Amyra “aka the Monsters”. I guess I shouldn't call them little anymore. Jadzia is now 19 and Amyra is 17. Some would think that being a disabled single parent would be harder than most, I personally don't know if being disabled made it any harder. I had to be creative when it comes to going places especially when they were babies. When I first became a single parent I felt I had already figured out a lot of things. Well, if anyone has toddlers then they would truly know that is a false statement. One of the first things I had to figure out was how am I going to go anywhere. I had one kid learning to walk and the other not wanting to stop walking. I got pretty lucky and when Jadzia was born my mom wanted to get us the BMW of strollers. This BMW of strollers had the car seat built in. Keep in mind this was almost 20 years ago and having a car seat attached to the stroller was a big deal.
First of all, getting two babies dressed and in the car were easy compared to walking around in public places. Being that we had this BMW of strollers I figured out a way to take the car seat portion and attach it safely to my chair. Not wanting the oldest to run off as toddlers like to do, I would have her in my lap. I am sure the three of us looked pretty interesting walking around the mall.
One day I had this bright idea I was going to take them to the movies. Imagine once again me with two kids, one attached to my chair in a car seat and one in my lap. We got to the theater and managed somehow to get the snacks and drinks and the three of us in our seats. At this point I thought to myself, awesome we can watch a movie and I can rest from walking around. Jadzia was all excited about getting to see the latest Disney movie. As the theater lights go down and the screen lights up, all of a sudden BOOM the music kicks in. I look at both of the girls thinking how exciting, boy was I wrong. When the music started Jadzia freaks out covers her ears and starts running towards the door. Trying to not freak out myself I jumped up grabbed Amyra in her car seat and attached it to the chair. Thankfully I was able to do this really fast. I start running up the aisle out of the theater and yes, in a panic I thought I had lost my child. When I get at the door she was standing there waiting for me with one of the theater workers. I knew my child had issues with really loud noises and didn't think that a theater playing a kids movie would be that loud. I am thankful for the theater manager, she felt my pain and being that we didn't see the movie she gave us a refund.
As they got older going to the mall and other public places became easier. When I say easier I mean for them. Instead of a car seat attached to my chair and carrying around two toddlers, I had a six year old and a four year old. Once again I had to be creative to keep up with the monsters. I would have Jadzia standing on the foot rest of my chair and Amyra sitting in my lap. Having them riding on my chair became the norm until they got too big. As time went on the cool place to ride with dad was being able to sit in the front seat of the car. My chair normally sits in the front seat of the car when I drive. The rule is if you sit in the front seat of the car you are in charge of putting my chair in the car. This was always great for me, since I didn't have to do anything. Now that they are young women and no longer babies they decided it's easier on them to just sit in the back seat again.
In conclusion I don't know if it was harder for me being a disabled single parent. I know that for me it was all about being creative- which we all do, not just as single parents but as parents.

A light skinned, grey haired man sits in a wheelchair. He wears a blue buttoned shirt and light grey tie, and holds his hands together on his lap.
DONATE via Fractured Atlas!