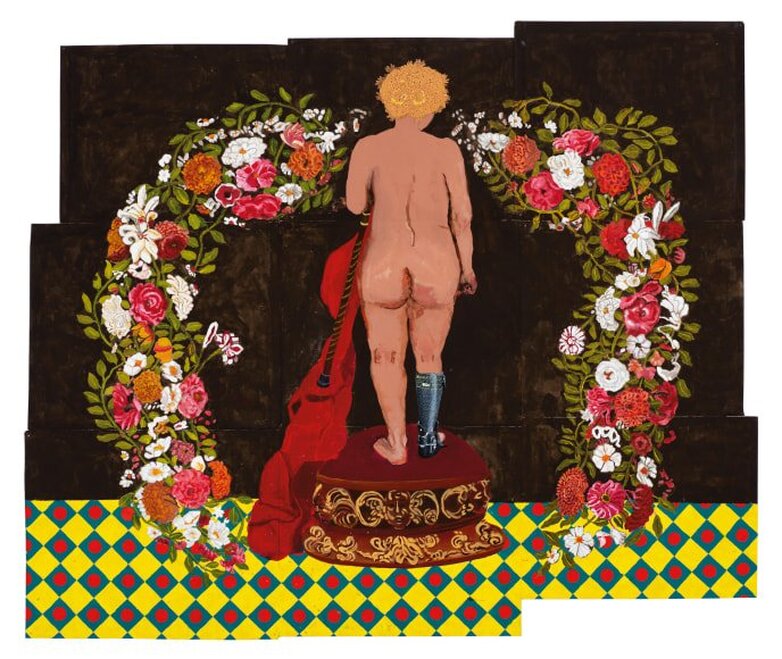 Sherwood has long used her artwork to engage with concerns around disability and feminism, by considering how both ableism and gender play a role in our understanding of art from both a historical and contemporary perspective. Herself being disabled following a debilitating cerebral hemorrhage at forty-four, in the decades since, such concerns have only become more urgent and visible in Sherwood’s work. In these recent paintings, she continues with her strategy of making revisionist additions to art historical images, collaging in scans of her own brain or depicting her subjects with assistive medical devices – particularly those she uses herself. Simultaneously, she has deepened her exploration of the historical precedent of female artists, notably in a major self-portrait after an altarpiece by the 17th century Portuguese painter, Josefa de Óbidos. While the original painting combines elements from devotional paintings and still-lives, a hallmark of de Óbidos’s oeuvre, Sherwood replaces the central Christ child with her own disabled body, offering a two-fold critique: of the limitations in subject matter female painters historically faced and the liberating potential of the self-portrait.

Sherwood’s work addresses intersectionality, feminism, and art history through the lens of disability. Her life and art completely changed when she had a cerebral hemorrhage at the age of 44, which paralyzed the entire right side of her body. After a period of recovery, she returned to painting with a newfound vitality. Forced to relearn to paint with her left hand, she discovered that she “became a more fluid and urgent left-handed painter,” and adopted a more gestural painting style by working flat and pouring paint directly onto her canvases.

Sherwood began her career in the ’80s, creating figurative feminist paintings while living in the East Village, New York. Returning to the Bay Area in the ’90s, she began painting abstractly in a highly conceptual style, referencing the medieval manuscript "The Lemegeton", brain imagery from the 19th and 20th centuries, theories of the holographic paradigm, and CIA satellite images of Russian nuclear test sites. She continued to explore these themes in her work post-stroke, referencing medieval seals of leaders such as King Solomon and Koran and collaging photo-lithographs of her own brain’s arterial paths. As she redeveloped her approach to painting, her work became an extension of her activism for disability rights. The "Healers of the Yelling Clinic", a series of constructed figure paintings made with textiles and brain-scan heads which she began in 2010, allude to the Yelling Clinic, a collective co-founded by Sherwood and artist Sunaura Taylor. Their goal was to foster awareness and begin a dialog on disability and art therapy, particularly the causality between war and disability. A subsequent series of Venuses challenge the limited scope of inclusivity and feminism in art history. Appropriations of odalisques are adorned with elaborate crowns atop of heads made of collaged brains, all with different skin tones and signifiers of disability such as canes and prosthetics. They are painted on the backs of reproductions of classical paintings, formerly used as instructional aids at UC Berkeley. Most recently, Sherwood has been developing a series she calls Brain Flowers, exploring the transient nature of existence. These still lives, made on the same recycled reproductions, are based on post-Impressionist and 17th century Dutch flower paintings and incorporate the artist’s own fMRI scans as flowers.

After Josefa de Obidos
On a white background an uneven edged black wall extends above a patterned floor. The geometric pattern is yellow squares alternating with dark green squares with red circles in the centers. In the center of the work is a round burgundy colored dais adorned with gold filigree. A nude figure stands on the dais with her back to us. She has peach colored skin, a slightly crooked spine, and her hair is filled with yellow brain scan imagery. A cane is hooked over her left arm. A red garment dangles from her left side and her right leg has a dark blue brace on the calf and foot. She stands under a flower arch that touches the floor. The flowers are white, mustard yellow, orange and shades of pink. There are lilies, roses, and daises amid winding green leaves.